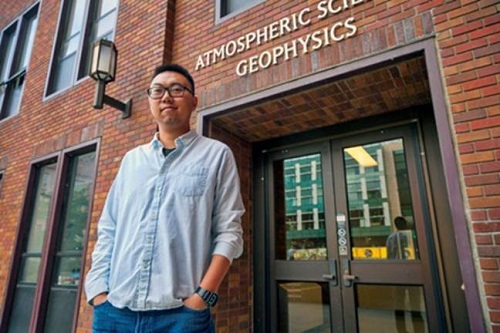 Xiaofeng Meng joined the University of Washington’s eScience Institute as a WRF Innovation Fellow in 2015.

Meng is working with the Pacific Northwest Seismic Network, a collaboration between UW and the University of Oregon, to develop an auto-correlation technique to identify risks from volcanic and seismic activity in the 700-mile Cascadia subduction zone.

Being able to recognize pending catastrophic events is a vital part of protecting the tens of millions of people who live in the region.

Cascadia is the potential source of “The Really Big One,” a massive earthquake that could devastate much of the west coast should it occur. Cascadia has produced several quakes of magnitude 9 or greater and is believed to have triggered activity along the San Andreas Fault. Some of the most potentially destructive volcanoes in the U.S. are located in Cascadia: examples include Mount Rainier, Mount St. Helens and Mount Mazama, the eruption and subsequent collapse of which created Oregon’s Crater Lake.

Prior to joining UW, Meng earned his Ph.D. and was a postdoctoral fellow at Georgia Institute of Technology. He holds a bachelor’s in physics from Beijing Normal University.

The passing of a legend. It is with heavy hearts that we learn the sad news of the passing of William H. Gates Sr. “Big Bill,” or “Bill Sr.,” as he was affectionately known, passed away on September 14, 2020.

Will Canestaro, Ph.D.: Legend and HEOR

Will Canestaro of Washington Research Foundation receives a University of Washington School of Pharmacy Early Career Achievement Award and becomes an Alumni Legend.