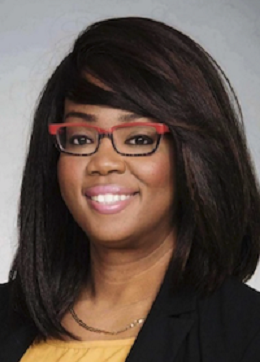 Francis, who earned a doctorate in science education from the University of Tennessee, Knoxville, has extensive and personal knowledge of the many institutional barriers that exist for people of color in the United States. Some she has learned through first-hand experience as a Black woman in science, some through the lived experiences of friends and colleagues, and some through the many years she has devoted to educating herself and others. The reality is that systemic biases prevent many Americans from having the same opportunities and protections as their peers. This may be especially true in science, technology, engineering and mathematics (STEM) fields.

Francis first showed her aptitude as an educator following undergraduate and graduate studies at Fisk University, an HBCU (Historically Black Colleges and Universities) whose notable alumni include sociologist and activist W.E.B. Du Bois and Rep. John Lewis. After earning a master’s in chemistry, she served as assistant director and a teacher with Girls Using Scientific Tools for Opportunities (GUSTO), and taught in the To Harness, Retain, Understand, Sustain and Teach (THRUST) program. GUSTO and THRUST were created to make science more accessible to middle- and high-school students from underrepresented communities. Inspiring students to pursue subject areas and careers where there have traditionally been few opportunities has been important to Francis for as long as she can remember.

“Everyone who touches a student’s life is responsible for their development,” said Francis. “One bad experience can shape a student’s future. We should all ask ourselves, ‘Am I meeting students where they are?’ How am I creating a sense of belonging and community? How can I be an advocate and effect meaningful change?’”

Systemic biases, in addition to creating substantial educational and economic barriers for some communities, can have lethal consequences. Francis acknowledges that the killing of George Floyd by Minneapolis police officers in May 2020 was a galvanizing moment for the country and her work.

“With George Floyd, people couldn’t look away this time. People who had previously chosen to ignore what was happening to Black Americans at the hands of police, or didn’t take action because they had other priorities, were a captive audience because of stay-at-home orders due to the pandemic.”

The nationwide Black Lives Matter demonstrations that followed were an important step, but Francis, a postdoctoral fellow in the chemistry department at the University of Washington (UW), wanted to create a space for people of color to talk about their concerns, experiences and plans for a way forward with colleagues who had also been marginalized. There was no way of knowing how long the issue of systemic racism would hold the public’s attention.

Francis organized Dear Black Student First Fridays (DBSFF) at UW in just two days at the beginning of June. DBSFF was planned as a monthly two-hour event for Black students at the university to connect with one another and Black professionals to talk about their interests, experiences, concerns, career development and ideas for concrete steps toward racial equity. Given the quick turnaround, the event wildly exceeded Francis’s expectations. Students told Francis that it was exactly the support they needed at that time, and participating mentors said that they gained just as much as they had contributed. All immediately volunteered for future events.

Perhaps the wider legacy of DBSFF will be the discussions and programs that followed. Individuals and multiple departments at UW asked Francis how they could contribute—both financially and through their expertise and influence.

Francis outlined a series of workshops and panels surrounding equity in STEM subject areas in which people of color are historically underrepresented despite enrolling in university-level courses in disproportionately high numbers. She solicited feedback from students, professors, UW administrators and external partners to gauge the level of interest.

The result was PR²ISM: Pedagogy and Research on Race, Identity, Social Justice and Meaning, a program that Francis created and expanded to 17 professional-development workshops and panels featuring STEM and diversity, equity and inclusion (DEI) experts from around the country. Francis herself presented a session titled What Does an Equity-Minded Space Look Like? She envisioned university faculty, staff and students attending the inaugural series between July and September 2020. Sponsors, including Washington Research Foundation (WRF), quickly pledged their support for a program that aims to initiate positive systemic change through education and embracing difficult conversations.

Francis’s engagement with multiple departments and institutions was deliberate, and a hallmark of her own style of working. She has long seen the value of interdisciplinary approaches to problem solving.

“Collaboration is usually the most effective way to achieve something on this scale. We have to talk to colleagues with other backgrounds and expertise—we can’t work in silos. The problems we’re addressing aren’t new. They’ve always existed, so we can’t use the same approach, with the same people, every time,” said Francis.

“What TK is doing with PR²ISM is a good demonstration of the interconnectedness of science. Some of the biggest breakthroughs have come about when people with different skill sets and a common goal work together. But if often takes a catalyst like TK to actually make those collaborations a reality,” said Shoultz.

The interactive sessions that make up PR²ISM’s programming are unique, but with a common theme. Instead of promoting equality (where everyone is given the same resources to put them on the path to success) or equity (everyone having what they need as individuals to put them on that path) as endpoints, how can society—and specifically, education—remove all barriers to success so that the burden is not on the individual to make their needs apparent? Workshops such as Understanding URM [underrepresented minority] Undergraduate STEM Student Experiences and How to Support Minoritized Students During a Pandemic address this directly. Due to COVID-19, the sessions took place online, which Francis points out can both remove and create barriers. Although proximity to the UW campus was no longer important, participants needed access to suitable equipment and venues. Most sessions filled immediately, and many had long waitlists.

“My hope is that every participant will be inspired to implement at least one strategy or tool from each session in their lab, department, college or institution within the next year. Each of us has to commit to doing the necessary work in our own spheres of influence. That is how real change begins to take place,” said Francis.

PR²ISM’s success has enabled Francis to schedule a third series for the spring of 2021. She hopes to secure the modest funding that will allow her to offer the community-wide workshops semiannually.

The influence of mentors and positive role models on a student’s path led Francis to develop STEMM(S): Strategies and Tools for Equity Minded Mentoring (in STEM) in parallel with PR²ISM. STEMM(S) is a mentoring education program that began in October 2020 to provide essential tools to those who hope to guide undergraduates, graduate students and postdocs toward successful careers.

“I’m lucky that I had excellent mentors, including Dr. Carolyn Hodges, vice provost and dean emerita of the graduate school, at UT. That experience helped to shape my doctoral studies in a successful way. Earlier at Fisk, Dr. Princilla Evans Morris [former executive vice president and provost] shared Maya Angelou’s view on the importance of recognizing when you are a role model: how it is imperative to empower mentees so that they feel that they can do anything but fail. There are no limits except for the ones they place on themselves. Also at Fisk, Dr. Papousek, my first math professor, told me I would go on to get my Ph.D. I had barely finished a semester, so that was a huge vote of confidence,” said Francis.

The value of being mentored comes in part from learning about the obstacles that students might encounter, and recognizing that they aren’t insurmountable, Francis said.

“My experience at an HBCU was important in a lot of ways. My time at Fisk prepared me for some of the barriers I would face, but it also gave me a chance to see professors who looked like me. Students need role models and mentors who they can relate to and help them to prepare for what’s to come. Otherwise, how is that student going to navigate unexpected obstacles at a new job?”

Dr. Ed Taylor, vice provost and dean of Undergraduate Academic Affairs at UW and a panelist at PR²ISM’s Call to Action: Becoming an Equity-Minded Leader at Your Institution session, wrote an op-ed for The Seattle Times in June. He recounted his awareness as a child, and regular reinforcement since, that all are not equal in the U.S. He described Francis’s development of three programs addressing this issue since June as “unprecedented.”

“It’s a public purpose, for a decent community and a thoughtful public,” said Taylor, emphasizing the wider implications of Francis’s work.

Fellow Call to Action panelist Dr. Lee Limbird, professor and dean at Fisk University, explained the need to provide people with “hugs and thumbtacks” in tackling disparities in DEI: supporting those who need it most and providing reminders for anyone who is comfortable with an unfair status quo. Call to Action moderator Dr. Isis Artze-Vega, vice president of academic affairs at Valencia College, described Francis as “visionary.”

The National Academies of Science, Engineering and Medicine invited Francis to be a panelist at their virtual workshop, The Impacts on STEM Undergraduate and Graduate Student Experiences of Higher Education’s Response to COVID-19, in September.

In December, Francis was named among Cell Mentor’s 1,000 inspiring Black scientists in America, and in March 2021 the American College Personnel Association (ACPA) recognized her as the award recipient for Innovative Response, Social Justice at ACPA21 for her leadership and commitment to diversity and inclusion initiatives at UW.

The ACPA represents 1,200 institutions globally, with a mission to “[transform] higher education by creating and sharing influential scholarship, shaping critically reflective practice, and advocating for equitable and inclusive learning environments.”

Francis has been nominated for a 2021 Outstanding Public Service Award, presented to just one UW faculty or staff member each year. The winner will be announced in the spring.

The overarching goal with the programs she has developed, Francis says, is to give those who have the biggest influence in shaping students’ academic experiences—faculty, staff and other students—tools to take back to their personal and professional spaces that will promote positive change in the long term. Many of the lessons are applicable across multiple industries.

“We need to make sure that these changes are sustainable,” said Francis. “In most cases, that means educating people to recognize the behaviors and systems that are harmful—things like racial profiling and making assumptions based on gender or background. We all have multiple identities, and we need to have the freedom to express and reconcile them. None of our identities should be a barrier to whatever path we want to take.”

We are sad to learn of the death of our colleague Edmond Fischer, Nobel laureate. We encourage you to learn more about his exceptional life. Obituary from UW Medicine Newsroom […]