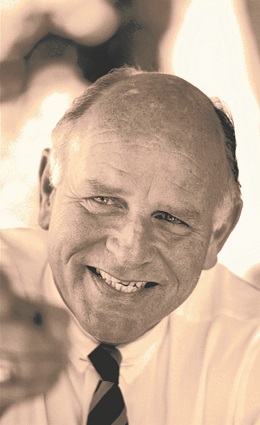 A dynamic and inspiring business leader, W. Hunter Simpson was the driving force behind the creation of the Washington Research Foundation. Friends universally described him as “larger than life.”

A lifelong supporter of the University of Washington, he often described the UW as “the most precious asset” in the Pacific Northwest. A native of Tacoma, he received his business degree from the UW in 1949 and joined IBM, where he rose to become head of the company’s Seattle office with responsibility for 600 employees in 11 states.

Hunter surprised friends and business associates in 1966 when he left IBM after 17 years to become president of Physio-Control Corporation, a struggling medical device company that later became known internationally for its Lifepak™ defibrillator monitors, products that have saved the lives of hundreds of heart attack victims. He created a corporate culture where employees, known as team members, enjoyed a four-day work week, quarterly company-wide meetings that sometimes resembled pep rallies (including the UW Husky marching band) and public recognition for jobs well done.

In the mid-1970s, Physio-Control began manufacturing two products derived from research done at the UW. Although the university was known for the quality of its researchers, it had no mechanism in place to commercialize any technology arising from research. Hunter took the unusual step of paying voluntary royalties to the UW for the technologies that Physio-Control commercialized.

Hunter also took one more step toward securing revenue for the UW from its technology. Hunter and a group of friends that included Tom Cable, Bill Gates Sr. and others with close ties to the UW decided to form WRF as an independent foundation to facilitate the transfer of technology to the private sector. The WRF was incorporated in 1981, and its patenting and licensing program has since generated hundreds of millions of dollars in revenues.

Hunter remained on the board for the rest of his life. He also served as a UW Regent and a director of the UW Foundation Board. He and wife Dottie received the first-ever Gates Volunteer Service Award in 2002 in recognition of their support to the UW. Those whose lives Hunter touched personally and professionally will miss him, and his legacy will endure in the WRF and other organizations which benefited from the power of his persuasive leadership.

“Hunter could well be remembered as one of the greatest regents in the history of the institution.”
William Gerberding, former UW President