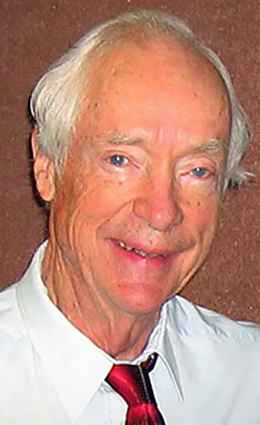 We are saddened by the passing of our colleague and partner Earl Davie. We invite you to learn more about his life and his enormous contributions to science, public health and Washington state.

Obituary from The Huddle, UW Medicine

Obituary from The Seattle Times [paywall]

Dr. Earl W. Davie’s research has saved thousands of lives and was responsible for one of WRF’s earliest licensing successes.

Earl Davie received a degree in chemistry and a Ph.D. in biochemistry from the University of Washington, and following eight years at Harvard and Case Western Reserve became professor and later chair of UW’s Department of Biochemistry. After graduate school, his collaborative research focused on identifying the events leading to enzyme activation of proteins of the pancreas and blood plasma. In these studies, the human blood clotting factors were isolated, characterized and cloned, with further studies demonstrating how these proteins interact and lead to clotting.

Factor IX, an essential plasma protein, is inactive or absent in patients with Hemophilia B (originally known as Christmas disease).

Patients had traditionally used Factor IX concentrates derived from donor plasma, which were subject to supply and contamination issues. Davie and postdoctoral fellow Ko Kurachi were able to clone the Factor IX gene to allow the consistent production of a recombinant preparation free of contamination.

U.S. patent rDNA Preparation of Christmas Factor and Use of DNA Sequences (Factor IX) was assigned to WRF, which licensed it to BTG to accompany an extensive Factor IX patent portfolio the company had been assigned from Oxford University. BTG licensed this entire portfolio to Genetics Institute, which was developing a recombinant Factor IX preparation for clinical use. The first recombinant Factor IX was given FDA approval in 1997 and Genetics Institute’s BeneFIX has since been used extensively to treat Hemophilia B, saving thousands of lives in the more than 60 countries in which it is sold.

In 1981, Davie co-founded Seattle-based Zymos (now ZymoGenetics), which focuses on the discovery and development of therapeutic proteins and today has more than 500 employees. Many of ZymoGenetics’ original research products have been commercialized, including Novolin recombinant insulin, GlucaGen and NovoSeven (all with Novo Nordisk), REGRANEX (with Johnson & Johnson), GEM 21S (with BioMimetic Therapeutics) and Cleactor (with Eisai). ZymoGenetics also markets RECOTHROM Thrombin for the control of surgical bleeding.

Davie was elected a member of the National Academy of Sciences and has received accolades including the Distinguished Achievement Award of the American Heart Association, the International Prize from the French Association for Hemophiliacs, the Waterford Bio-Medical Research Prize, the Robert P Grant Medal in Thrombosis and Haemostasis, the Stratton Medal from the American Society of Hematology and the Bristol-Myers Squibb Award for Distinguished Achievement in Cardiovascular/Metabolic Research.