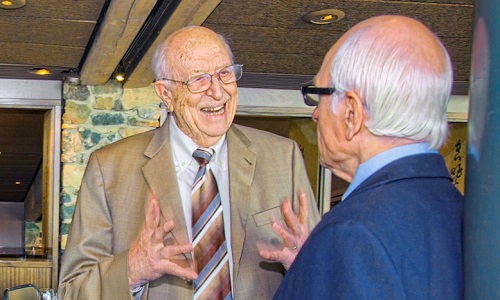 The passing of a legend

It is with heavy hearts that we learn the sad news of the passing of William H. Gates Sr. “Big Bill,” or “Bill Sr.,” as he was affectionately known, passed away on September 14, 2020.

Bill was a founder of the Washington Research Foundation (WRF) along with Hunter Simpson and Tom Cable. The existence of WRF is a legacy and testament to Bill’s work. In addition to his role as founder, Bill served as counsel and a long-term board member of WRF. His vision and tenacity helped position WRF as an independent nonprofit organization and a significant supporter of scientific research in the state of Washington. Bill, along with his co-founders, recognized the importance to research universities of protecting and exploiting their intellectual property. It was a challenge worthy of Bill’s legal skills. Pursuing this goal, WRF protected critical University of Washington intellectual property from the Ben Hall labs and others at the UW. This work and the resulting licensing revenue from these patents produced more than $445 million in revenue for the UW and helped establish the WRF endowment. This in turn has been a source of substantial grants and gifts to the UW, WSU and other life science research organizations in Washington state. WRF is committed to carrying on the vision of Bill and his co-founders.

Big Bill wore many hats in his career, doing so with distinction and accomplishment. His work with WRF grew out of his love and devotion for the University of Washington. He served on the Board of Regents, the UW Foundation Board and as co-chair of major capital campaigns. As many involved with the UW will attest, when Big Bill asks it’s nearly impossible to turn him down.

Bill had an honored and distinguished legal career. He was a successful private practice attorney. He was a name partner in K&L Gates LLP, one of the largest law firms in the world. He extended his contributions to the law beyond his practice. He served as president of both the King County and Washington Bar Associations, and as a long-term delegate to the American Bar Association’s House of Delegates. The ABA awarded Bill its highest honor, the ABA Medal, in 2009.

Philanthropy was always important to Bill, from his support of the United Way of King County to his role as co-chair of the Bill and Melinda Gates Foundation, where he helped guide the foundation’s strategic direction and focus.

Bill touched so many lives over his long and productive career. We at WRF are profoundly grateful for his contributions to WRF, to the UW, the state of Washington and the world.

Washington Research Foundation Staff and Board of Directors

We are sad to learn of the death of our colleague Edmond Fischer, Nobel laureate. We encourage you to learn more about his exceptional life. Obituary from UW Medicine Newsroom […]

A message from our chairman on Ron Howell’s retirement

A message from our chairman, Brooks Simpson, on the retirement of Ron Howell after 29 years as CEO of Washington Research Foundation Dear Friends and Colleagues: We would like to […]